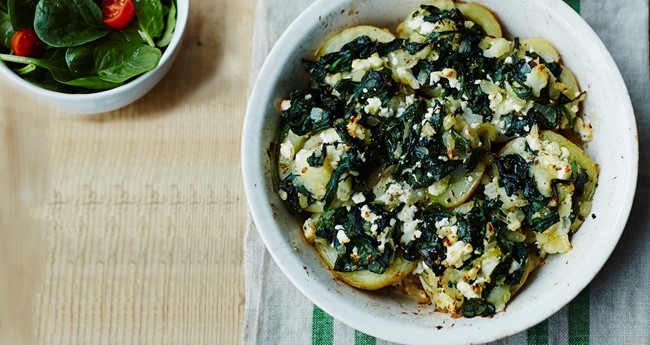 Prick each of the King Edward potatoes three times with a fork. Put them onto a plate and cover them. Microwave the King Edwards on the highest setting for 10-15 minutes. The insides should be soft.

Next, make the Spinach mixture. Get your biggest frying pan. Add the onion, garlic, fennel seeds or oregano, the water and olive oil. Sweat for 7-8 minutes until the onions are soft; add more water if you need to so that the onions don’t fry. Add the sliced spinach, sauté over a high heat for 2 minutes until the spinach softens completely. Mix in the feta cheese and stir until it is melted enough to bind the spinach and onions. Take the pan off the heat.

Cut each King Edward in half. Scoop a tablespoonful of flesh from the centre of each. Add the flesh to the spinach mixture, squash and then mix it well. Season to taste.

Brush the flesh of each half King Edward with olive oil, then season with salt and pepper. Stuff the spinach mixture into and over your potatoes. Put them into a pie dish or just back into the large frying pan if it is oven proof. Bake for 10 minute and serve.

This recipe can be prepared at least half a day ahead up to the point of baking. Just heat the stuffed King Edwards through in the microwave a little before you give them their final ten minutes in the oven.

The stuffed King Edwards reheat very well. Make twice the recipe and have them again a day or two later.

4 large cloves of garlic, peeled and finely chopped or crushed

1-2 tbsp extra virgin olive oil, plus a little for brushing the potatoes