Preheat the oven to 220°C/200°C fan oven/gas mark 7. Put a tray into the oven to heat up. Put the potatoes into a pan of cold, salted water and cover with a lid. Bring to the boil then as soon as the water is boiling, turn the heat down and simmer for 5-6 minutes. Drain well and shake in the colander to roughen up the edges.

Put 2 tbsp oil into a bowl and add the potatoes. Toss well and season with salt and the smoked paprika. Tip the potatoes into the roasting tray and roast in the oven for 30 minutes. After 15 minutes, turn the potatoes over and add the mini chorizo to the tray, too.

Put the spinach and shallot into a pan and cover with a lid. Place over a high heat and cook until the spinach has just wilted. Spoon between two shallow dishes and make two dips in the middle of each. Crack the eggs in and bake in the oven, alongside the potatoes for around 10 minutes.

Season the eggs with the paprika and scatter over the dill then serve with the crème fraiche.

Cook’s tip: If you can only get hold of a chorizo ring, cut off 5cm and dice. Cook in a dry frying pan until golden and sprinkle over the eggs.

A good pinch of smoked paprika

For the baked eggs Use your leftover mash to create something different with these potato pancakes. The classic combination of salmon and avocado is fantastically easy but a guaranteed success. Top with a runny poached egg and drizzle with lemon and olive oil for that extra special touch. 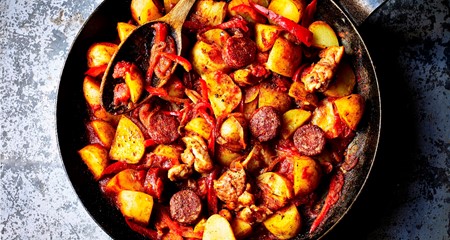 Fantastically simple yet packed full of flavour, this dish is perfect to share with friends. Serve with yoghurt and top with pomegranate seeds to compliment that Cajun kick! 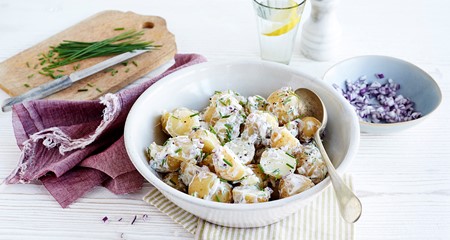 Potato salad is an all year round favourite and easy to rustle up in bulk making it an ideal dish for parties or Christmas family dinners.  This simple Creamy New Potato Salad recipe ensures yumminess every time with the help of crème fraiche, mayonnaise and beautiful salad potatoes. 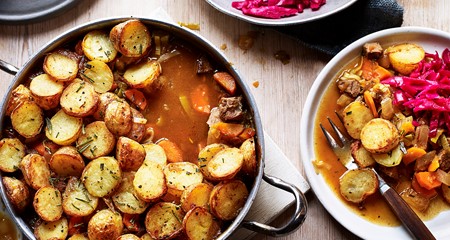 An easy way to use up any leftovers from your Sunday roast - all you need to do is add some extra veg and a bit of stock.